Beginning in 2005, a charge called the Global Adjustment has become a constant presence on the electricity bills of Ontarians.

In this five-part series called “Tame the Beast,” the goal is to help you understand:

What started out as a small cost component of the total electricity bill has grown to be more than the cost of electricity itself. It was intended to be a general fee which would be used to pay for various conservation initiatives and grid investments, as well as the cost of guaranteeing electricity rates to energy generators.

This fee, originally called the Provincial Benefit, and funds three types of initiatives: the regulated rates for the Ontario Power Generation nuclear and hydroelectric generation facilities, fixed payments to existing generators, and fixed rate contracts to new generators that use alternative energy sources such as solar and wind. 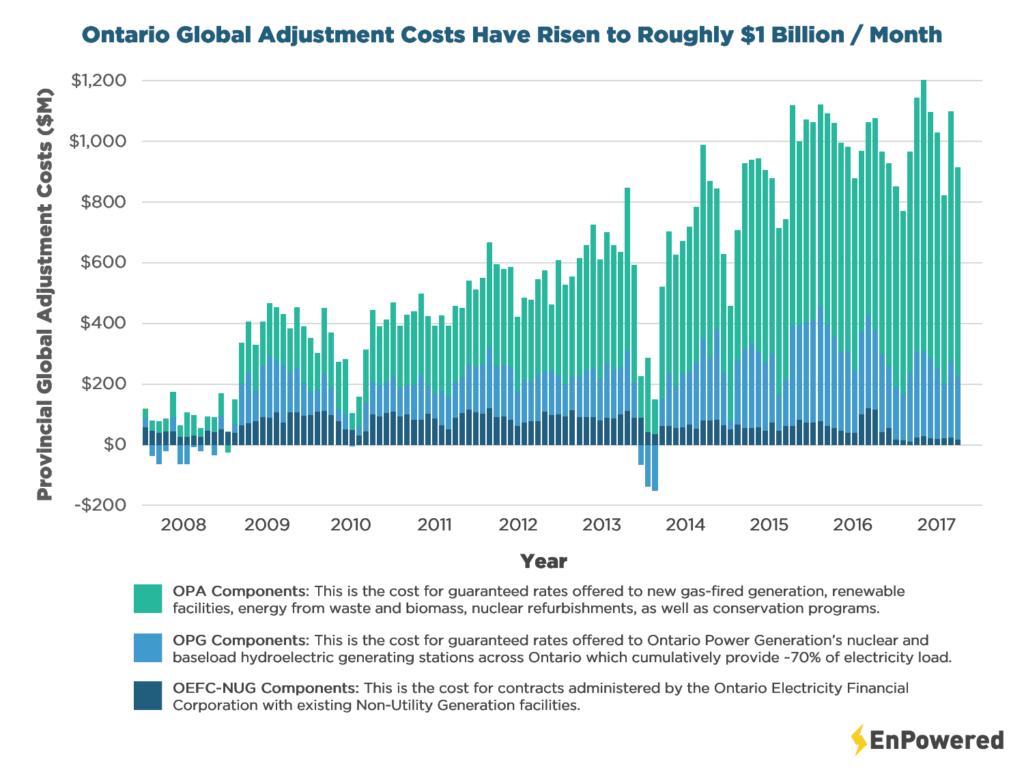 The Global Adjustment is charged in two different ways to Ontario energy consumers depending on the volume of electricity they consume.

The province’s largest volume electrical consumers have the option to be labelled as Class A consumer, remaining consumers are grouped together as Class B. The definition of what qualifies as a Class A customers has been changing since the introduction of the classification system.

For smaller volume consumers, such as homeowners, their Global Adjustment costs are misleadingly included within their time-of-use rates.

On the other hand, Class A customers do not pay a set rate for their Global Adjustment fees, instead they pay a percentage of the entire Province’s monthly Global Adjustment costs based on how much electricity they use during certain peak hours.

A peak hour is an hour where the Province of Ontario’s electricity usage is at its highest, usually due to extreme weather events. As an example, if ABC Corp.’s usage accounted for 1% of the total provincial electricity demand during the peak hours, then ABC Corp. would be billed 1% of Ontario’s Global Adjustment costs each month for the entire year.

If managed properly, a business can save a significant amount of money by becoming a Class A customer. With Global Adjustment costs now contributing nearly 70% to a business’ electricity costs, the ability to reduce this cost creates considerable savings.

It is important to note, however, that the Class A designation could cause some businesses to lose money instead if their electricity usage was significant during peak hours. For this reason, Class A customers may opt-out of the program and can continue to be billed as a Class B customer if they wish.

With that said, most Class A customers choose to remain in the program once they qualify for it and opt in. This is because if a company is successful in reducing its energy demand during peak hours, it can significantly reduce energy costs for the entire year.

If a company somehow avoids using any energy at all during all five peak hours, they would pay absolutely nothing in Global Adjustment costs. This means that a Class A customer can save up to 70% of their electricity costs.

This Class A Global Adjustment program known as the Industrial Conservation Initiative (ICI), and is run by the IESO (Independent Electricity System Operator as described in Part 1 of this article series). The essential idea is to incentivize industrial users to reduce their energy usage during five key peak hours. This is necessary because it reduces costs across the entire electricity grid.

The electricity grid of any region must be built so that it can meet the maximum expected demand for any given year.

Naturally, electricity usage changes day-to-day, with usage increasing considerably during very hot or very cold days. What this means is that the electricity grid must be built to supply enough electricity for these peak days, which creates a significant amount of excess capacity for the rest of the year.

This excess capacity is very expensive to install, and is part of the reason that electricity costs can increase (see more in Part 2: How Global Adjustment Ruined Ontario).

As a result, it is beneficial for everyone in a region to reduce electricity usage during these peak hours. To encourage this, the IESO created the Industrial Conservation Initiative (ICI). By incentivizing Ontario’s largest businesses to reduce their electricity usage during peak hours, the entire Province can save money by building a smaller grid with less capacity. 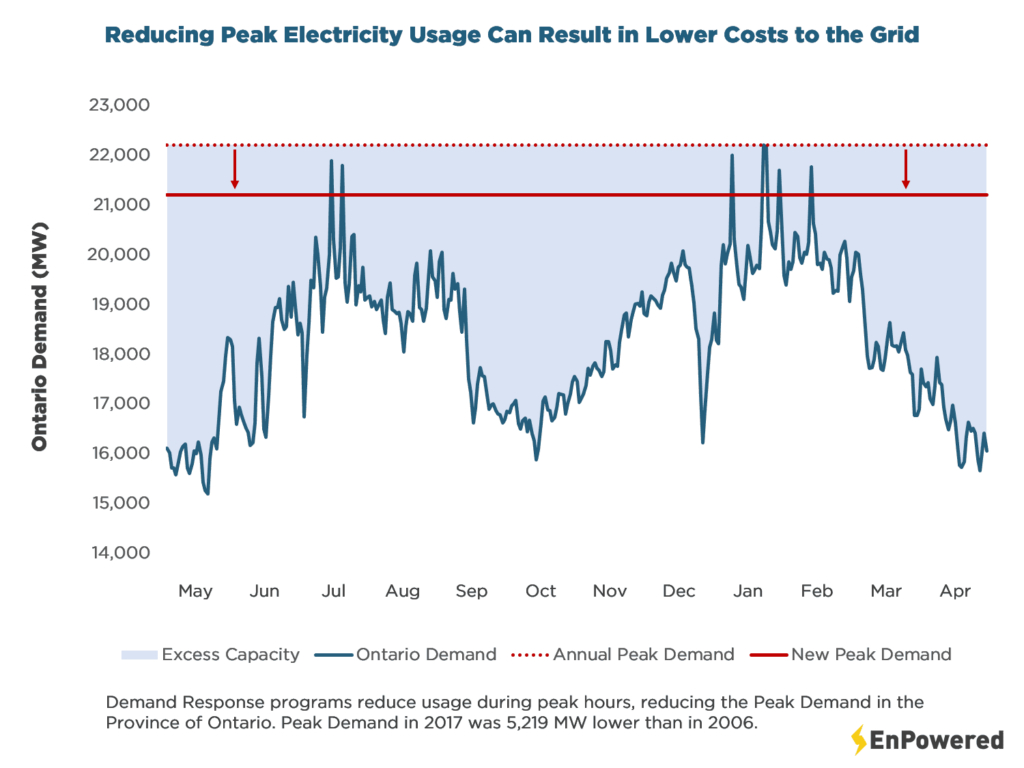 According to the Long-Term Energy Plan (LTEP) issued by the Ontario government, there is currently adequate electrical supply for the Province’s current energy needs. However, the Province cautions that there may be a shortage coming as soon as the 2020s.ii

With that said, the lower the peak energy demand that occurs in the Province, the smaller and less wasteful the electrical grid can be. Thereby reducing the future investments required to maintain the Ontario electricity grid.

Although 90% of Ontario’s energy mix is non-carbon emitting, during days of peak energy demand, there is an increased reliance on conventional energy sources – particularly natural gas generating facilities. These are commonly referred to as peaker plants when used in this capacity.

The Province continues to use natural gas-powered facilities as peaker plants because they have the capability of modifying their output volume easily. Therefore, when provincial energy demand goes up, the owners of the natural gas plants are readily able to increase their energy supply.

In contrast, most of the other energy sources in Ontario, such as wind, solar, nuclear, and hydroelectric generators, have far more difficulty changing their output and are generally considered to be base load generators. Thus a base load generator is simply either turned on or off.

This is the primary reason why nearly every electricity grid in the world still relies on natural gas-powered facilities. Secondly, the cost of using storage to meet these peak hours is simply too high when compared to the cost of operating a natural gas peaker plant for a few short hours each year. For these reasons, Ontario is unlikely to be able to remove these remaining power plants in the near future without further innovation.

When a peak day occurs, Class A customers attempt to reduce their electricity usage in efforts to lower their GA fees.

Reducing usage for a total of just five hours each year to save as much as 70% on their electricity costs.

Similar to other electricity grids, the electricity usage in the Province of Ontario is very volatile day-to-day.

It is not uncommon for usage to increase or decrease by as much as 30% in a single day.iii Given this, it is remarkably difficult to predict peak hours and subsequently decide in advance when to reduce usage. This is the principal frustration that Class A customers face.

At the same time, the Industrial Conservation Initiative provides a very significant incentive for large electricity consumers to do precisely that – to somehow predict the future energy demand and to reduce their energy usage during these key periods. While not an easy task, the opportunity to save millions of dollars make this something that most large energy consumers are actively attempting to do each year.

As mentioned earlier, a business properly managing the ICI Program is able to save up to 70% of its annual electricity costs simply by reducing its usage a few times per year. It is important to note that there are only five peak hours during the entire year that determine how much a Class A customer pays for its electricity.

The better a company can predict when precisely these five peak hours occur, the more savings it can unlock. To reiterate, this also means that a company only really needs to reduce their usage for a total of just five hours each year to save as much as 70% on their electricity costs.

As an increasing number of companies participate in this initiative, predicting when the five peak hours will occur has become increasing challenging.

These difficulties will be explored in more detail in the following section. In the beginning of the program, there were only a few dozen participants. However, the expansion of the program has resulted in a situation where there are now several thousand companies participating.

In 2017, there were a few thousand eligible individual organizations that could participate in the initiative as Class A customers.ii Examples of eligible entities include factories and industrial manufacturing facilities, large buildings such as condominium complexes, college and university campuses, and in general any facility that uses at least 0.5 MW of monthly average demand.

There are now three different ways that a company can qualify for the ICI Program, mostly depending on the amount of electricity that they use.

Level 1 Class A Consumers: This is the first tier of Class A customers. This type of customer has been eligible for the Class A program since the beginning, and qualifying organizations are automatically enrolled into the program. If the organization wishes to decline participation in the program, they must manually request an opt-out.

Requirements for this tier of customers is that its facility must be located in Ontario and have a monthly peak demand greater than 5MW.

Level 2 Class A Consumers: This second tier of Class A customers was added to the program in 2016. Unlike Level 1 Class A Consumers, these organizations must manually request to enrol in the program. Apart from this factor, they are able to receive the same sorts of rewards as the Level 1 Consumers.

For a company to qualify for this tier, their facility must be located in Ontario and have a monthly peak demand between 1MW and 5MW.

In addition, they must also be located in Ontario and meet the requirements of the facility having a monthly peak demand between 0.5MW and 1MW and be denoted as a primarily manufacturing-oriented operation as designated by their NAICS code.

Read on to find out the struggles that nearly all Class A companies in Ontario run into when they try to predict energy demand peaks as part of their task to reduce their Class A Global Adjustment costs. 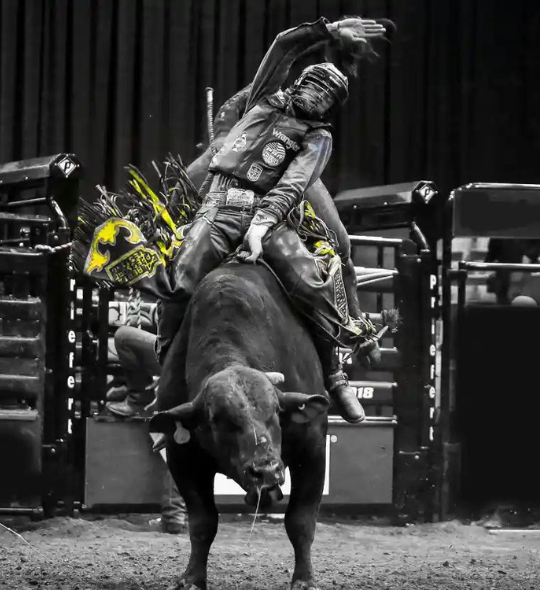 Part 4: Why You Can’t Predict the Class A Peaks